Kashmir Student Alerts News,
SRINAGAR – Police Monday flexed muscles on bank job aspirants who staged a peace­ful sit-in protest outside Bank Corporate Headquarters in Kashmir capital Srinagar against the government deci­sion to scrap list of 2018 batch JK Bank Probationary Officers and Banking Associates.
Pertinently, Jammu Kash­mir Bank Bank conducted the tests in April 2019 for the posts of Bank Associate and Probationary Officer. Thou­sands of unemployed youth had applied for these posts that were notified by the Bank in 2019.
From past year, these aspi­rants who appeared in these tests after undergoing coach­ing, spending a lot of money were waiting for the results, but in a surprising move, the Jammu Kashmir administra­tion recently scrapped the list of 2018 batch of both Proba­tionary Officers and Banking Associates and directed Fi­nance Department to advise JK Bank for initiating fresh recruitment for 250 PO and 1200 Banking Associates.
The decision of the gov­ernment shocked the aspi­rants who in large number are continuously protesting outside Bank Corporate Head­quarters in Srinagar. On Mon­day as well, these aspirants carrying placards sat outside ban headquarters to seek jus­tice. They alleged that incum­bent administration is play­ing with their careers and it is least bothered about them. “If various illegal infirmities had been pointed out in the ongoing recruitment process in Jammu Kashmir Bank as claimed by Principal Secre­tary Planning, Development and Monitoring, then why our times and money was wasted and why such a deci­sion was not taken earlier,” said protesters to Kashmir News Trust.
They said that during the last recruitment process so much fraud surfaced but those who got job in the bank were not touched. “What about our time and money. Shall we have to pay the fee again? The government deci­sion is shocking and it makes clear that corruption is deep rooted in the system,” they said
Police emerged on scene and flexed muscles on the protesters. Police lightly ba­ton charged these protest­ing aspirants and several of them were detained.
Fayaz Ahmed, a protester alleged that he sustained injuries in his hand after po­lice charged on them with canes. KNT 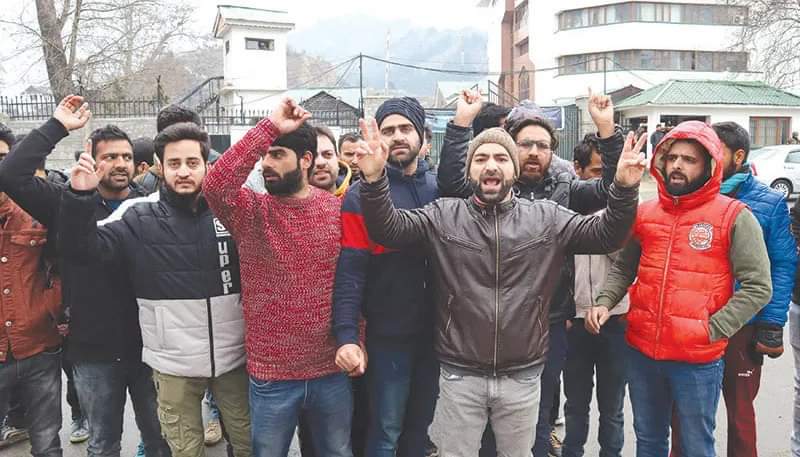