Kashmir Student Alerts News,
Bhopal: A young migrant worker from Madhya Pradesh, Ramu, began an arduous journey home from Hyderabad along with his pregnant wife Dhanwanta and infant daughter Anuragini. But with the lockdown in place, he could not find a bus or a truck to make the journey. 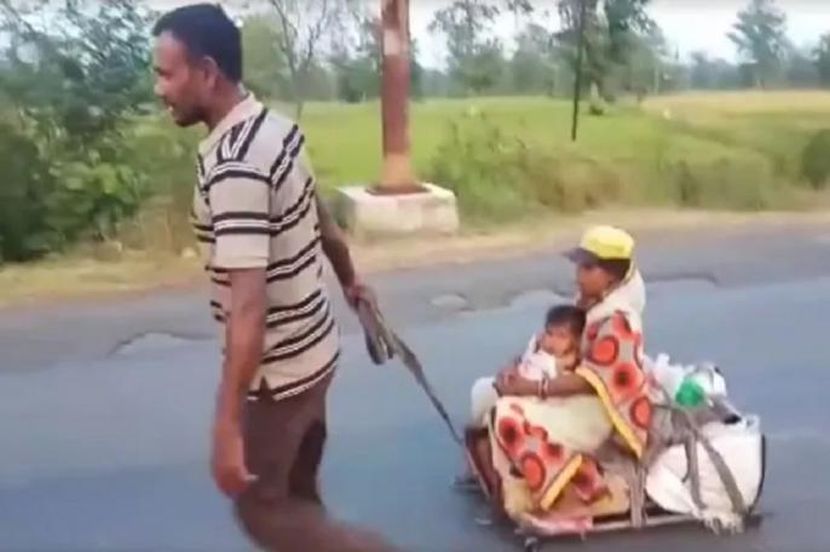 Undeterred, he wheeled his daughter and pregnant wife for most part of the 700-km route on a makeshift wooden cart that he made with wood and sticks, a feat that has been captured on video and shared extensively on social media. They reached their village in Balaghat district on Tuesday.
349 people are talking about this
"I first tried to carry my daughter and walk. But it was difficult to walk the entire distance on foot with my pregnant wife. So, I built a makeshift cart with wood and sticks I found in the jungles on the way and then pulled the cart all the way to Balaghat," said Ramu, who walked for days without anything to eat to reach his village.
But as he entered his native district through Maharashtra, a police team, led by sub-divisional officer Nitesh Bhargava, provided the three with biscuits and food. He also gave new slippers to Ramu's infant daughter.
"We subsequently got the family to undergo medical check-up and sent them in a vehicle to their village in Balaghat, where they will stay in home quarantine for 14 days," Mr Bhargava said.
In another "viral video", a migrant labourer, also from Madhya Pradesh, is seen walking along an ox pulling a cart carrying his brother and mother-in-law. But the young farm labourer, who could only manage to find one ox, can be seen in the video, with his sister-in-law, pulling the cart alongside the animal.
Tags # News
Share This
By Kashmir Student Alerts
Email ThisBlogThis!Share to TwitterShare to FacebookShare to Pinterest
Labels: News
Newer Post Older Post Home