Home News Reopening of schools | Parents' consent must for students to attend: DSEK

Reopening of schools | Parents' consent must for students to attend: DSEK

Kashmir Student Alerts News,
The reopening of schools for secondary and higher secondary classes will be a voluntary exercise for students who will be allowed to attend the schools only after getting consent from parents, officials on Friday said.

As already reported by this newspaper, Director School Education Kashmir (DSEK) Muhammad Younis Malik Friday chaired a meeting with Chief Education Officers (CEOs) to review the preparedness of the reopening of the schools.

At the meeting the CEOs were asked to implement the guidelines of MHA and health and family welfare department for reopening of schools, the DSEK told Greater Kashmir after culmination of the meeting.

Notably the MHA and H&FW department issued the guidelines regarding partial resumption of activities in schools on voluntary basis from September 21. The schools are likely to reopen for students from class 9th to 12th.

“We have instructed the CEOs that it is a volunteer exercise for students to attend their schools and no student will be allowed to attend the classes without the consent of their parents,” Malik said.

The department is also collecting the details of the government schools which are still utilized as quarantine facilities. “We have not collected any feedback but details of these schools will be collected from CEOs,” he said.

Malik said the schools will only open outside containment zones and there will be no formal classroom work but students can visit their schools for teacher guidance. 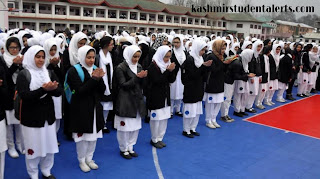 Notably, the parents have opposed the government decision to reopen schools for students citing the non-availability of facilities in schools. Also, as per the academic calendar prepared by the school education department, the current academic session is likely to culminate by the end of September followed by the commencement of annual exams in November. (GK)
Tags # News
Share This
By Kashmir Student Alerts
Email ThisBlogThis!Share to TwitterShare to FacebookShare to Pinterest
Labels: News
Newer Post Older Post Home